In Memory of
George Theodor
Sciuk
1933 - 2018
Click above to light a memorial candle.
Memorial Candle Tribute From
Armstrong Funeral Home Limited
"We are honored to provide this Book of Memories to the family."
View full message >>>
Menu 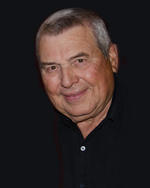 SCIUK, Dr. George
With deep sadness we announce the peaceful passing of Dr. George Theodore Sciuk on March 24, 2018 in his Naples, Florida home. George was beloved husband of Rosemary for nearly 60 years, father of David (Michele), Richard, Rita (Yves) and Carl (Joane) and very proud grandfather of Ally, Nick, Julien, Selena, Justin, Derek, Mirella and Colin. Son of John and Stella he is survived by his brother Richard (Shirley).

George was born on May 30, 1933 in Oshawa. He graduated from Central Collegiate High School where he had a distinguished athletic career especially in football and baseball. George attended the University of Toronto and graduated from the Faculty of Dentistry in 1958. George opened his dental practice on Simcoe Street in Oshawa where he built incredibly deep relationships with so many patients over the 50 years he practiced dentistry.

Somehow he and Rosemary found the time between having their 4 children over the next 5 years to join the Oshawa Golf & Country Club, where they built many lifelong friendships and pretty decent golf games. When George retired from Dentistry, he and Rosemary split their time between Oshawa and Naples, Florida, where they were members of Imperial Golf Club and built many new friendships. George enjoyed fine food and cooking. He shared his passion for food with friends and family – we have never wanted for sandwiches or great dinners….

Everyone who knew George will remember his deep love of family and friends, his sense of loyalty and caring for those around him.

Memorial Visitation will be held at the Armstrong Funeral Home, 124 King Street East, Oshawa on Tuesday April 3rd from 2-4 & 7-9 pm. Evening prayers will be held at 7:30 pm.
A Memorial Mass of Christian Burial will be held at St. John the Evangelist Catholic Church (903 Gifford St, Whitby) on Wednesday April 4th at 10:30 am.
Memorial Donations may be made to the Canadian Heart and Stroke Foundation (http://www.heartandstroke.ca/) or a charity of your choice.
To place an online condolence please visit www.armstrongfh.ca