In Memory of
Allan Wesley
Lambert
1930 - 2018
Click above to light a memorial candle.
Memorial Candle Tribute From
Armstrong Funeral Home Limited
"We are honored to provide this Book of Memories to the family."
View full message >>>
Menu 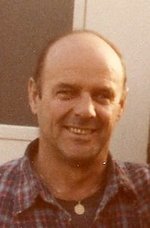 Bud was a true ‘tough cookie’ surviving many incidents, accidents and injuries throughout his life. Coming back strong and stubborn every time. He worked at GM and for H.R. Stark Plumbing. He and Joan were avid bowlers and members of the Oshawa Rockets Motorcycle Club. He also was very skilled as a motorcycle mechanic during the heyday of the ‘gangs’ and wrenched for Dave Rockbrune and Russ Milburn both dirt track and Ice racers. He eventually took up SCUBA diving and was very active with the Oshawa Diving Club. In his later years he volunteered and championed the CNIB and (after they closed their Oshawa office) the LIONS Clubs and the services they provided for the blind. He outlived 3 guide dogs, starting with Spike in 1985. He played on the very successful ‘Ice Owls’ blind hockey team.

A Memorial Service will be held at ARMSTRONG FUNERAL HOME, 124 King Street East, Oshawa on Monday April 23rd at 2pm. Visitation will be held one hour prior to service time. Interment to follow at Mount Lawn Memorial Gardens, Whitby with his wife and son. Family and friends are welcome to return the funeral home for a reception. Memorial donations to the Courtice Lion’s Club or charity of your choice would be appreciated. To place an online condolence please visit www.armstrongfh.ca.