To share your memory on the wall of Barbara McIlquham, sign in using one of the following options:

On Thursday October 29, 2020, Barbara Lee McIlquham (nee Frink), loving wife of Douglas Clifford McIlquham and mother of six children passed away at the age of 89 in Whitby, Ontario.

On Thursday October 29, 2020, Barbara Lee McIlquham (nee Frink), loving wife of Douglas Clifford McIlquham and mother of six children passed away at the age of 89 in Whitby, Ontario.

Barbara was born on October 6, 1931 on a farm in Ernestown Township west of Kingston Ontario, to Walter and Ruby (nee Spratt) Frink. She left home at the young age of eleven to attend high school at KCVI in Kingston and then graduated with an RN from the KGH School of Nursing at Kingston General Hospital in 1952.

Our mother was a kind and forgiving woman, wife and mother. She was the embodiment of “turn the other cheek” and a great role model for temperament, civility and absolution. We think (know) she demonstrated and had lots of practice in the 67 years Mum was married to our father, and the 35 years she had children, and especially teenagers under her roof! Hers was unconditional love, and no matter how much we tested Mum, her grandchildren challenged Grandma, or the great grandkids exhausted GiGi, she never looked at any of us differently.

Mum was also a nurse and even though she only practiced her craft for a short time before David was born, she proudly wore that “cape” her entire life. “Once a nurse always a nurse” as the old adage goes, which we often joked! In her last few years, Mum might not have remembered the right name or word, but she always knew she was a nurse. Mum & Dad moved to a retirement apartment at Taunton Mills four years ago and we always smiled when she saw the staff in “scrubs” and immediately was transported back to her hallowed halls of KGH.

Barbara was born on a farm, grew up in Kingston away from her parents (as she wanted an education), and raised her family in Hamilton and Oshawa. She was much more adventurous than most people guessed, which was best demonstrated by that decision to leave the farm at such a young age and live with her older sister in Kingston. Barbara was truly Doug’s partner in their life journey, and she even spent much of the 90’s working side by side with him in the family business, Murray Johnston’s Ltd. One of the happiest times of her life was retiring with Doug and moving back to her family property in Collins Bay, and building a final home. She spent many years there looking out at the lake she grew up beside, honing her skills of graciousness, patience and tenacity while dealing with Doug “in retirement”!

Barbara was preceded in death by her parents Walter & Ruby Frink, her sisters Pauline Schultz (Ottawa), Geraldine Gray (Kingston) Bertie Little (Kingston) and brother Ernie Frink (Wilton). In addition to her husband Doug, six children, and sons-in-law & daughters-in-law, Barbara is survived by eleven grandchildren, their spouses and partners, seven great grandchildren, and many nieces and nephews.

Armstrong Funeral Home in Oshawa handled Barbara’s funeral arrangements and cremation. A celebration of her life will be held at an appropriate time in the future, when we all can be together. Then, we will remember an intelligent, kind and wonderful woman, who was loved and respected by all, and who never, ever whispered an unkind word about anyone.

Although Barbara loved flowers, she always counted her coins (a result of being raised on a farm and having six children), so would not wish you to spend money on them now. If you are inclined, a gift in her memory to a charity or your choice would be much appreciated. Online condolences may be left at www.armstrongfh.ca
Read Less

Receive notifications about information and event scheduling for Barbara

We encourage you to share your most beloved memories of Barbara here, so that the family and other loved ones can always see it. You can upload cherished photographs, or share your favorite stories, and can even comment on those shared by others.

Posted Nov 19, 2020 at 04:03pm
My Aunt Barb holds many many great memories. Her compassion and love for her family stands out the most. She was one of the most caring individuals I have ever known. My condolences to my Uncle Doug and his family for their loss. My thoughts and prayers are with them,
Comment Share
Share via: 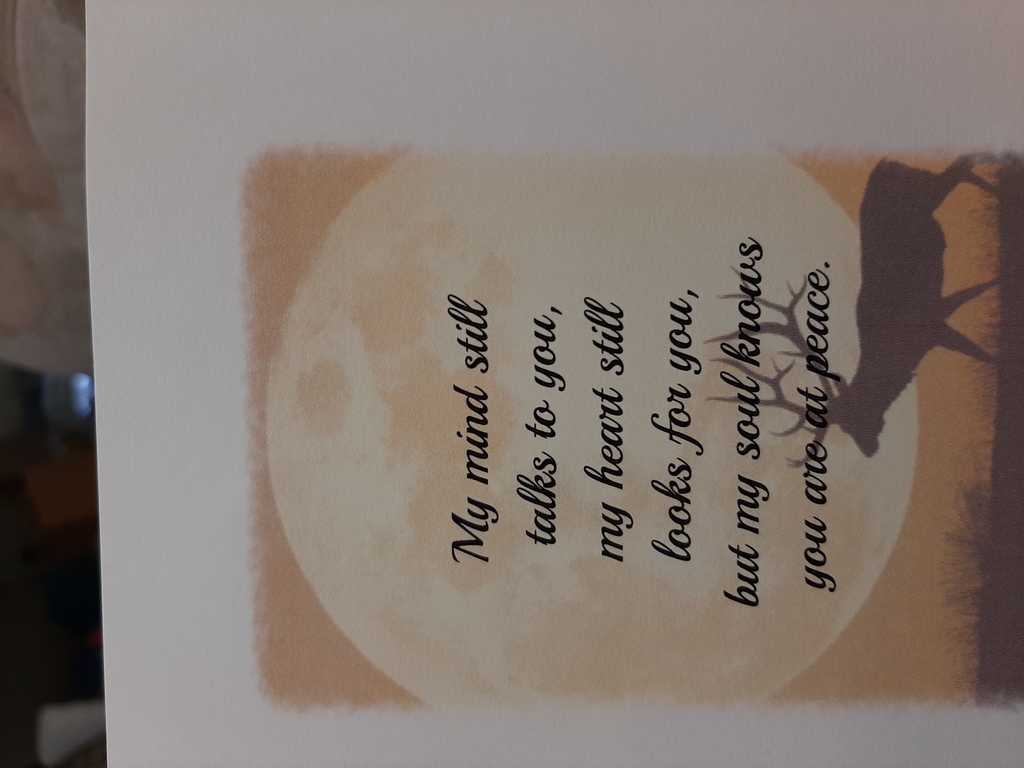 Posted Nov 17, 2020 at 08:18am
It has been a privilege to have been part of Barb’s care team for the last 10 months of her life. She was a remarkable, proud and strong lady. I will never forget her smile and laughter. Thank you for all the joy you brought into my life. You will always be in my heart. Theresia Kramer
Comment Share
Share via:

Posted Nov 15, 2020 at 08:19pm
As a care giver, I only knew Barb in the final 14 months of her life but I grew very fond of her. She was always smiling. Right to the end. I could see that she was a strong, independent women yet always willing to help. She was infinitely patient with me as I learned how to help her. We had good times and lots of laughs together. I will never forget her. She was a grand lady.
The picture below is how I will always remember her.

Thank-you Barb for teaching me how to gracious and forgiving in difficult times. 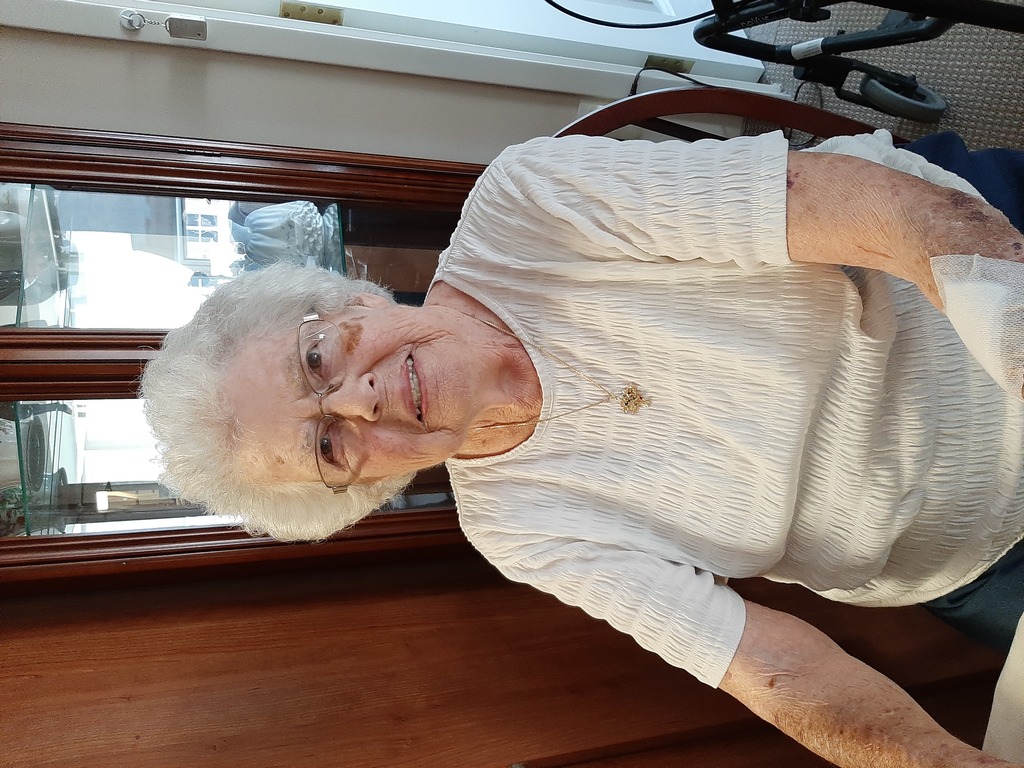 Posted Nov 13, 2020 at 02:54pm
Dear Doug and family
I was sa to read about Barbara’s death in the Whig Stanard.
I have many happy memories both at Collins Bay and at the store in Oshawa .
Barb was a wonderful cook and always interested in hearing about Kingston.
She will be truly missed.
My deepest sympathy ..Marion Swan
Doug Swan sends his sympathy .His wife Doris was a nursing classmate and good friend
Comment Share
Share via: 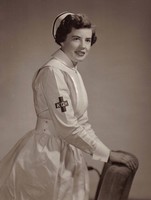 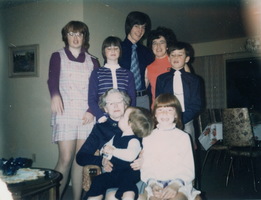 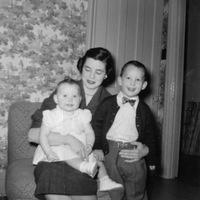