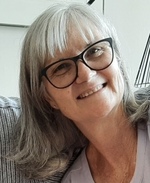 
Born to an Air Force family, June 27, 1958, in Summerside, PEI, Janice was the youngest of nine children.

Janice loved all her brothers and sisters but considered Tee one of her two best friends. Tee was full of fun and like Janice, valued and respected everyone for who they were and never found fault. Janice treasured the relationship they had together. Both women passed in less than a month of each other. Tee from Alzheimer’s disease complications and Janice after a courageous, but short, fight with cancer.

Because of the Air Force career, the family moved around settling in Welland, Ont. Janice spent her formative years in this mid-sized canal and steel town cherishing every minute of it.

She loved spending time there with her other best friend Lucy. They met at Holy Name Catholic Elementary School in grade two and kept in touch their entire lives. An hour, maybe two, could go by with the phone ringing busy. We all knew Janice and Lucy were catching up on their children, friends, or whatever was the interests of the day.

Janice went on to be an Ontario Scholar at Norte Dame High School in Welland and maintained an A average at Brock University. Because of her high academic standing her parents never spent a dime on her post-secondary education. She completed her Honours degree entirely on scholarships.

She was respected by her professors. One politics professor even incorporated some of Janice’s ideas into his course. He said her ideas were important ideas that needed to be explored and shared with other students who would take the course in the future.

Janice had also been selected by the federal government in 1975 to join the inaugural year of the Katimavik program. Subsidized by the federal government, the organization moved eighteen-year-olds around Canada assisting farmers, small communities, and inter-city groups with their projects. Janice was paid one dollar a day for her service to these groups and communities.

While studying at Brock she met her future husband John MacDonald, a Cape Bretoner who was perusing his Master’s degree in Judicial Administration.

The student with the highest marks in the honours program was invited to take a class with the graduate students. Janice was that student. The day she walked into the classroom John was immediately smitten and told a couple of his friends he would ask her out.

John never dreamed the first date would turn into a 41-year romance producing two children, Luke and Anna. Luke, Anna and John were the loves of her life. She cared for and nurtured her children always the happiest when doing so. She stuck by them all when life was rough. She relished the moments when the four family members were together sharing stories fun and laughter.

Janice spent seven years with the federal government, which she hated, and 31 years with the Durham Separate School Board, teaching kindergarten which she loved. She was devoted to public education and the little ones she taught.

Many parents over the years, once they had one child taught by Janice, wanted their upcoming children in her classroom. Those parents understood Janice’s devotion to her profession, her colleagues and Catholic education.

Janice made many teacher friends over 31 years. She was so grateful for them all and the interest they showed in her life professionally and personally.

John, Luke and Anna would like to thank the McFadden family for all their help during Janice’s illness. As well as Constance McIlwain, Martha De Gannes, Mike Ward, Tim Harriett, Dale Whitney, sisters Margaret and Eileen and Claire St-Onge, who was always devoted to Janice and her family.

The family would also like to thank all the nurses in the Pediatrics ward at Oshawa General Hospital where Janice stayed because no beds were available. Nurse Haley floor 5G, nurses Amy and Lawrence in the emergency ward Zone 4, nurse Irene in Clinic no. 5, Respirologist Dr. Julie May Huang and Oncologist Dr. Orit Freedman. Pharmacists Maxine and Sara at Lovells Drugs were also kind and generous with their time.

In lieu of flowers donations may be sent to the charity of one’s choice.