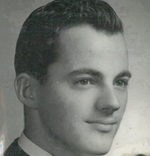 Caron, Michel
June 11, 1945-July 10, 2019
Passed away peacefully at Lakeridge Health Oshawa in his 74th year with his family by his side.
Beloved husband of Virginia for 38 years. Michel was an employee of the LCBO for 30 years. He is survived by his siblings Diane Capel (Richard), Gaétane Caron (Victorin Brassard, deceased), André Caron (Monique), Guy Caron, Gilles Caron and René Caron (Nicole). Michel was predeceased by his parents Ronald Caron and Marie Blanche Thibault.
Michel will be greatly missed by his extended family in the Philippines Celestina Nicken, Carlos, Dionisio Jr., Estrellia, Dorean and Gregorio Torres, as well as his many nieces and nephews.
Visitation will take place at Armstrong Funeral Home Saturday July 20, 2019 from 10 am
until the time of service at 11 am.
Burial in L'Islet-sur-mer, Quebec to follow.
Donations to the Lakeridge Health Foundation would be appreciated.