To share your memory on the wall of Robbie Kernohan, sign in using one of the following options:

Receive notifications about information and event scheduling for Robbie

We encourage you to share your most beloved memories of Robbie here, so that the family and other loved ones can always see it. You can upload cherished photographs, or share your favorite stories, and can even comment on those shared by others.

Posted Apr 29, 2019 at 01:42pm
Rob has left many great moments & memories behind. He will be remembered for his love of all music (except opera). Over the years, he has ‘serenaded’ us many times with one of his favourite songs…The Gambler by Kenny Rogers, Walk the Line by Johnny Cash, Wasn’t That a Party, or The Rodeo song! Rob played cards with Frank & Dave every Monday afternoon, and it seems his singing skills deteriorated with this trio—their rendition of “The Long & Winding Road“ was often referred to as a bunch of dying cats belting out their last!
Rob was an avid bowler and bowled with his league every Thursday afternoon for years. He always wanted to beat certain members of his team and had a running challenge with them. His favourite pro sports teams all had Chicago in common—the Blackhawks, Cubs & Bulls. He had given up on his favourite Canadian teams having a chance…
A number of years ago, Rob was living on Marland, and had come to 947 Adelaide (Day Services) for the day. When lunch time rolled around, he opened up his lunch and pulled out a beer. When questioned, he figured that the staff had packed it “accidentally.” Oddly enough, they hadn’t packed one in his roommates’ lunch. Since Rob had always been questioning why Day Services didn’t have their liquor licence, as he would really like to drink while he was here, he had found a way around this—once. Rob always loved heading out to a bar with a patio & having a drink with his friends! He also loved going to the Legion for a beer with Ed & the guys.
Rob leaves a dear friend Frank, who has many memories as well. Frank will become quite jolly remembering the time he ordered a pizza, and offered to share it with Rob. Rob happily accepted, and then took his first bite & got a mouthful of mushrooms—which he hated. Frank & Rob were often likened to the two old guys from The Muppets—Statler & Waldorf. This suited them to a “T.”
Many years ago, while staff were reading the newspaper for some current events, they read a story about a fellow by the last name of Kernohan who had won a great deal in the lottery. He was looking for a long lost relative, who he believed lived in the Oshawa area, and went by the name of Robbie. The staff—Angel & Cindy—said that can’t be you Rob, as he is looking for “Robbie.” Rob said his family always called him Robbie, so it must be him! Luckily, there was a phone number in the article if anyone knew this “Robbie.” Rob got up & went straight to the phone, and got ready for the phone number. He forgot to check the date on the calendar though…the staff gave him the number…1-800-April Fools!! The wind came out of his sails pretty quick…
Every now & then, Rob would share stories of his family. He loved visiting & talking with his brother Tony & sister-in-law Marie. Another story Rob enjoyed sharing was when he set the toaster on fire while living with his Mom (at Beatrice & Wilson).
Since Rob passed away, we have been sharing our memories of him. They have filled pages and brought some chuckles, smiles, laughter, and yes—even groans—amidst the tears and sorrow. Rob has always been able to make us smile, and thankfully that will continue. We are not saying his sense of humour was great…it would probably be more accurate to say that—most of the time—it was so bad we had to laugh. Rob was known for his one liners, groaners & puns, and for repeating them on a regular basis. These included (but are not limited to—as it seemed he had an endless supply):
“Can I have a hand please?” and breaking into applause instead of helping…
Saying that you had something to organize… “But organs don’t have eyes!”
Someone asking Rob how he liked his coffee… “Crisp!”
Rob would ask for a spoon, and we would offer the biggest one available, as we knew he had a big mouth! : )
Someone would drop a utensil, and Rob would immediately yell “Company is coming!”
When someone asked for a fork… “You’ve got to be forkin’ kidding me!!”
Rob would also say that when they made him, they broke the mold—we would reply “Thank God : )” Rob could take it as well as he gave it, and it was the rare time that someone would say something & he would be speechless—but he would do so with a smirk & “you got Me!”
Rob was also known for his use of sign language—he was a pro at flipping people the bird with a smile on his face. We would keep track of how quickly this would happen each day, and who had been flipped off the most that day. Our favourite photo of Rob…him flipping the bird at us!

Rob loved his weekends & time off/at home. More than that, he loved rubbing in that he had three day weekends. “TGIF” became a regular Thursday thing. When asked what he was doing with his time off, the answer was almost always, “whatever comes, comes.”
Recently, Rob had started taking Wednesdays off as well as Fridays. He was thinking more & more about retiring & slowing down. We would tell him that we understood, but that we would miss him. Hopefully we told him enough that he understood how important he was to everyone here.

With love, from all of Rob's friends at CLOC's Day Services

Posted Apr 19, 2019 at 12:40pm
Dear Tony and Randy
I am sorry to hear about Robbie's passing. We communicated on an irregular basis over the years. He was always interested in his Minden contacts and we reminisced a great deal about the many visits with he and his father.
Our family sends our sympathy. Cousins - Elinor, Doug and Ruth Ann Kernohan
Comment Share
Share via: 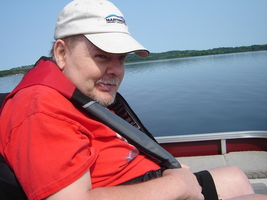