To share your memory on the wall of Andy Gondek, sign in using one of the following options:

Provide comfort for the family of Andy Gondek with a meaningful gesture of sympathy.

It is with a sad song from our hearts that we announce Monday April 6th, 2020 was the day the music died. Andy Gondek left this world from the Ottawa Hospital after living a life fully on his terms, with no a... Read More
Gondek, Zbigniew “Andy”

It is with a sad song from our hearts that we announce Monday April 6th, 2020 was the day the music died. Andy Gondek left this world from the Ottawa Hospital after living a life fully on his terms, with no apologies for his rock and roll lifestyle. He was in his 69th year.

Andy leaves behind a much-loved Gibson 6 string electric and a cherished 12-string Yamaha acoustic. He is also fondly remembered by his son Noel (Melodie) and daughter Stephanie (Craig Walker). Andy was the grandfather of Dillon, Taylor, Joseph, and Sabina-Jane. He will also be missed by his beloved cousin Alicja Wajdzik.

He was predeceased by his parents Andrew and Stella, and his brother Richard (Elizabeth).

Andy will be missed by his family, friends, and of course, the many, many fans that have faithfully waited for a return to his 1969 brilliance.

Andy’s passions were his music and songwriting. When asked how he wanted to be remembered he said, “I wrote over 700 songs, 70 were gifted, and 7 were absolutely brilliant.” He also excelled at a form of armchair philosophy that was rooted in cutting sarcasm and existential nihilism. One of his favourite Einsteinian digs was “the difference between genius and stupidity is genius has its limits.”

A Memorial Mass will take place in the future at St. Hedwig’s Polish Catholic Church, when gatherings are allowed once again.

Andy's parting words for whomever reads this is “my goal has always been for the audience to sing the chorus without me.”

For online condolences and to share stories with the family, please visit armstrongfh.ca
Read Less

Receive notifications about information and event scheduling for Andy Gondek

We encourage you to share your most beloved memories of Andy Gondek here, so that the family and other loved ones can always see it. You can upload cherished photographs, or share your favorite stories, and can even comment on those shared by others.

Posted Apr 28, 2020 at 10:10pm
My condolences for your loss... I remember Andy at Donevan Collegiate and his key role in The Strollers band with Vern Walters.
Andy was a real "character" with strong views and opinions, at times I couldn't tell if he was kidding or being serious.... he was always able to "fish me in" and we both laughed afterwards. Gone too soon.
Comment Share
Share via:
DB

Posted Apr 19, 2020 at 02:44pm
My Condolences to Andy's family and friends. Was a Stroller fan and supporter and school mate way back. Good memories.
Loss track after DCI. Too young.
R.I.P.
Comment Share
Share via:
NG

Thanks you for extending your condolences to our family. Through the gift of music he was able to touch many lives, both friend and fan and while DCI might be gone we still hope to celebrate the gift of his life at a memorial in Oshawa later this year. Stay tuned, and we hope to meet you there.
SL

Posted Apr 13, 2020 at 11:34pm
When I was 18 Andy and I collaborated on a number of songs. I still have hand written words to songs that he and I worked on. RIP my friend

That is amazing Shirley. If they have chords associated with the words maybe we could get some of dad's former band mates to play these gems. Otherwise, why not consider coming to his celebration of life and read your collaborative work? The plan right now is to have a open mic available for tributes - hope to see you there.
DK

Posted Apr 12, 2020 at 09:34am
Andy, you were definitely a free spirit. I know you loved my sister, Jane and together you had two wonderful children, Noel and Stephanie. Your talent with a guitar was undeniable and your ability to write and sing your own songs was remarkable. I wish your life had taken a different road and you were discovered by a recording executive or company who could have taken your career to another level. Perhaps you could have reached legendary status. So close and yet so far. Rock on Andy. Doug Kirby former Swamp member.
Comment Share
Share via:
NG

Thanks for sharing your thoughts Uncle Doug. Dad was certainly a talented and free-spirited individual. I know that he struggled to reconcile himself to the world around him as he thought that mundane life was both stilted and stifling to his free expression. Ultimately by choice (and the road of destiny) he was dealt a hand in which creative expression was lost. I think we should try to reconcile his death and the loss of his creative gift at his celebration of life. As a former Swamp member, how do you think about picking up a guitar again? Do you remember Oddfellow? Hope to see you soon.
SG

I remember when I first met my father for the first real time and was able to understand who he was as a person and his stories he told me. One of them being that I didn't know you were in the band or even that Sue was married to Howard! When I was able to meet him and hear how passionate he was about his music and he would explain songs he wrote and how much he actually was a friend to you. I guess his passion and love for music took him away from our family. The one thing I do know is that he definitely felt a great loss from not being present for so many years and definitely had strong feelings for everyone who was there in his time where it sounded like he could conquer the world. I am glad that he had good times with our family. Thank you for your kind words. Love you. Stephie
JB

Posted Apr 09, 2020 at 10:40pm
Andy was a warrior, a first generation Polish Canadian, a prodigy son from surviving WWII parents and a proud "one of a kind" baby boomer. Andy and I grew up together, five houses apart since preschool years, at a ground zero neighbourhood for hundreds of other similar families. We attended 3 different schools together, were altar boys at our local church, and terrorized the nuns and teachers at school during the week and our boy scout leaders on weekends. We were always in the principal's office. It seemed to our parents we were bad influences to each other. They did everything possible to prevent our crossing paths outside of the establishment. Perhaps it was a kind of curiosity in life that started a sort of rebellious attitude. In due time our adolescent years provided us with very competitive energy and feats of unlimited strength. Andy was a record breaking sprinter, followed by his favourite, the quarter mile. He was a great athlete, competing in high jumping, broad jumping and then discuss and shotput throwing in his high school years. Andy cleaned up with all the 1st place ribbons in many track and field events over the years. Andy, lived on the edge, as a "head" of those times. The music of the 50's and sixties influenced him greatly, initiating him into the local music scene after all those years of lessons and practice. He became Oshawa's idol and could play that guitar with the likes of Jimi Hendrix.
Andy was a legend of our times, bigger than life, a true spirit with boundless energy, intelligence and talent every parent and friend would want to have spent some time with... even if it was for only a few brief moments.
RIP Andy... one day we will play together... again.
John Bartosik
Barrie, ON

Thank so much for writing this John, I know that you had rich friendship with my dad. I think it's fair to say that you are one of only a handful of people who knew him on an intimate level, and likely have some of the best stories to tell. He was wild and defiant, but also really smart and sensitive. I gotta say that he would go on and on about his high school sporting talents -- and of all the stories those were the ones where I thought, okay maybe he is pushing the truth here a little. Sounds like I was wrong to second guess him. I hope that you'll be able to come to his requiem mass and celebration of life later this year. Plans are just coming together now, but it is my hope to make it a celebration of his music, poetry, and art -- with an open mic for sharing his best memories. 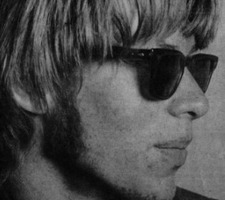 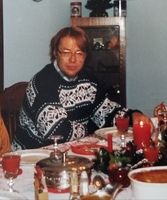