To share your memory on the wall of Dmytro Skorobohacz, sign in using one of the following options:

The gesture that can change the world

Donations are being accepted for: ST. GEORGE'S CHURCH.

We encourage you to share your most beloved memories of Dmytro here, so that the family and other loved ones can always see it. You can upload cherished photographs, or share your favorite stories, and can even comment on those shared by others.

Posted Feb 24, 2020 at 01:43pm
To Angela and John and Maria and the entire Skorobahacz family a donation has been made to the Ukaraian Care Centre on behalf of your father and grandfather Dmytro for the wonderful care he received during the last few years of his precious life. God bless him and all of you. John and Margaret Geniole💖💖

Posted Feb 23, 2020 at 07:57am
With loving memories of Dmytro Skorobohacz, one of the most nicest person to know.

With love, Natalia Halenda purchased flowers and planted a memorial tree for the family of Dmytro Skorobohacz.

Posted Feb 22, 2020 at 01:08pm
Sending healing prayers and comforting hugs to all of you. We are so sorry for your loss. While we did not get the pleasure of meeting your dad (grandfather), the stories you have shared and the pictures show what a wonderful man he was. Losing a family member is always sad but his memories live on forever. A donation has been made to the Ukrainian Canadian Care Centre.
Lots of love to John, Angela and your whole family from ours. Tammy Carruthers, Kelly Stilling, Mitchell and Mackenzie Timson...and Merlin.

Posted Feb 21, 2020 at 12:31pm
Our deepest condolences you, John and Angela, Maria, Christine and Chris, Kathryn, Anna and Josh. Please know that we are thinking of you during this very difficult time. It is never easy to lose a father and grandfather but rest assured that he has a special place in heaven, due to his never-ending love and knowledge of bee-keeping and gardening. This love has been passed on to his three wonderful granddaughters. A donation has been made in Pan Dmytro's name to the Care Center, in Toronto.
Veechnaya Pamyat!
Martha Nabereznyj, Irene and Brian Appleby and family, Roma and John Tymkewycz and families, John and Vanessa Nabereznyj
and family.
Comment Share
Share via: 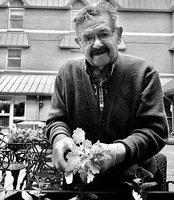