To share your memory on the wall of John Wade, sign in using one of the following options:

Provide comfort for the family of John Wade with a meaningful gesture of sympathy.

It is with great sadness that the family of John Victor Wade announces his passing on April 14, 2020, at the age of 76. John will be lovingly remembered by his wife of 54 years, Carolyn and children Jeff, Terry and Cathy. John will also be fondly remembered by his three grandchildren Andrew, Ethan and Emma. John was predeceased by his parents William and Margaret and his brother Bill.
John was one of the founding members of MacKenzie Park Association and was actively involved with the hockey and baseball programs with his children.
John retired in 2000, from General Motors after 37 years of service. After retirement, John enjoyed travelling with his wife.
A Celebration of Life will be held at a later date.
Those who so desire, may make a donation in memory of John, to the Canadian Diabetes Association.
Read Less

Receive notifications about information and event scheduling for John

We encourage you to share your most beloved memories of John here, so that the family and other loved ones can always see it. You can upload cherished photographs, or share your favorite stories, and can even comment on those shared by others.

Posted Apr 21, 2020 at 09:44pm
Our heart felt condolence to family and friends on the loss of John. May he rest in peace. Kathy (cousin), Joachim and Luke.
Comment Share
Share via:
B

Posted Apr 19, 2020 at 08:31pm
Carolyn and Family,
Our sincere condolences to you and your Family. Sweet Memories will last forever. Bless you all.
Comment Share
Share via:
JR

Posted Apr 19, 2020 at 10:34am
Cathy, Pat, Emma and Ethan: sorry for your loss. John will be greatly missed.
Judith and Ray
Comment Share
Share via:
AM

Posted Apr 18, 2020 at 09:04pm
Carolyn, I am so sorry to see that John has died. He is definitely one person I always looked forward to seeing or meeting. He had such a bright and happy outlook and always left me feeling more positive for having talked and kibitzed with him. My sincere sympathy to you and to Jeff, Terry and Cathy as you deal with John's loss. I'm sure the heavenly choir of angels will be much more-upbeat with his presence. May God's peace be over all of you. Ashton🎵
Comment Share
Share via:
DH

Posted Apr 18, 2020 at 07:59pm
We would like to express our sincere condolences. Our hearts go out to your family during this difficult time.

John will be remembered as a neighbour and our daughters (Kim Grasby Taylor ) baseball coach who lead the team undefeated one season his decication to sport passionate. Another GM retiree legacy,,, Sincerely Linda and Bradd Thompson 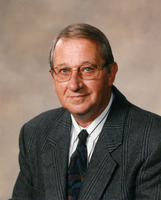